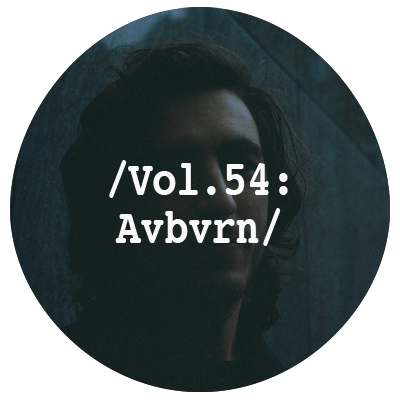 Ahead of the release of his ‘Self/Similarity’ EP on Air Max ’97‘s burgeoning DECISIONS label next week, we invite California-born, Frankfurt-based artist Avbvrn to take the helm for the new instalment of our mix series.

Prolific edit-maker Avbvrn takes an uniquely self-referential approach on constructing the five-track ‘Self/Similarity’ EP. Turning the editing process on himself, Avbvrn wrote a series of tracks to use as his own source material before sampling and processing them into five new tracks. However, while Avbvrn takes a studied approach to engineering his music, the results are visceral; ‘Self/Similarity’ is an impactful, multi-layered record that swallows itself and spits out a series of unpredictable new shapes delivered through their shifting dynamics and warped sound design.

Ahead of the release of the EP on 10th March, I caught up with Avbvrn to talk about his processes, edits and what people can expect from the EP. He has also delivered a thrilling mix that places material from the EP up against a slew of edits, as well as some well placed contributions from a handful of like-minded artists. Read the interview below and listen to the mix at the bottom of the feature.

I’m Ian and produce music under the name Avbvrn and have been making music with computers in some form or other since I was 14. I started with Ableton and some guitars and was really into making droney stuff. I eventually got bored of that because I felt that I could effortlessly continue making drones and was not pushing myself. I didn’t have enough music-theoretic knowledge to have an idea of the possibilities that I could try out or a formal understanding of what interested me in music that I admired. So I went back to the basics and started studying counterpoint and read Schoenberg’s Theory of Harmony and started writing piano music and eventually landed in the composition colloquium of the music conservatory in Frankfurt. Meanwhile, I kept playing around with Ableton and was making little hip hop beats when I had writers block and ended up making the music I make now.

How did you start out DJing and producing? Did one come before the other, and does that inform your approach, do you think?

Frankfurt’s party scene is really conservative and slow and I made some friends who liked the music I’d been making, were doing hip hop parties and playing a lot of contemporary Atlanta hip hop (Bricksquad etc.). For Frankfurt this was unfortunately really pushing boundaries at the time and they eventually asked if I wanted to play at some parties as well. So we started a loose collective, “Suplex,” and did parties every once in a while and that’s where I started Djing.

I think of DJ sets as big spontaneous sound structures or collages and always make new tracks or edits if I am playing somewhere, so playing live does influence my production in that sense. I also make a lot of edits for my friends – someone will show me a track they really like and ask for a remix or something. Because parties in Frankfurt are generally very conservative I found that by making edits of well-known tracks that I was able to stretch the boundaries of what people would accept by playing music that was at once familiar and unknown. Generally, I want to be able to play absolutely anything in my sets, so I just make and play music that I like without thinking of whether it will “work” in the club or whatever.

What are some of the most important influences that feed into your music?

I grew up listening to classical music and adored Bach, Mozart and Chopin so their influence is really fundamental. Morton Feldman and William Basinski’s work is a real important influence as well because I love hearing the very small developments that occur over long time scales. DJ Screw is also a huge inspiration for similar reasons. I love how he took tracks and expanded them by making them slower and deeper and often made new versions that I find superior to the originals. Early Three 6 Mafia, especially Underground Vol. 1, has also had a lasting impact.

Non-musical influences would probably be the works of W.G. Sebald and In Praise of Shadows by Jun’ichirō Tanizaki. The atmosphere of Sebald’s works has always been really attractive to me and the way he draws connections between seemingly unrelated events has also been a source of inspiration. Tanizaki really influenced my thinking about aesthetics and art-making in general. I also once dreamt of a black, sharp, hard, rough rock wrapped up in a white fluffy pillow and often reflect on the really weird but pleasant feeling that I had while I was touching the rock-pillow.

I guess I really like the juxtaposition of ugly and pretty. I also like recycling material, either through straight repetition or by changing how something is presented or by altering it outright. I don’t think I have any fundamental principles besides trying not to make boring things! I’d like to make “timeless” things.

You have a new EP coming out soon on DECISIONS. How did you link up with Air Max ’97?

I’d made a little edit of his track “Inside Outside” and emailed him to ask if he would be ok with me posting it on Soundcloud. He really liked the edit and we emailed some more and skyped and really clicked on an artistic and personal level.

The press release describes it as a ‘fully formed second iteration of a previous body of original work’. Can you talk us through your creative process and how the EP came together?

I really like making edits and have a lot of fun thinking about how tracks could be changed or taken apart. I was thinking about sampling and making art with art when I had the idea of making edits of myself. I decided to make tracks out of which I would make further tracks. Basically, I created a set of 5 tracks, that I then sampled to make 5 further tracks. Each track on the EP was created out of a single “parent” track – I didn’t sample from the stems but used the complete track. The process was similar to that of making a collage out of the pieces of a painting that you yourself painted. I just use Ableton and some Max for Live and some Pure Data to manipulate samples or generate sounds out of samples. I make a lot of samples from recordings of sounds that I make but I also use a lot of sounds from the internet. I often sample the tracks I am making while I am still putting the tracks together, so I guess I work kind of like a feedback loop?

A lot of your output is edits and remixes. What is it about that format that appeals to you?

I make a lot of edits and remixes because there are so many people making interesting sounds! Generally, I think of recorded music (and all sounds) as a giant collection of material with which to make something new. I also think it is important to credit the people from whom you got your material – I have some edits on my hard drive that, were I to play them, only I could know they were edits.

How do you pick out tracks that you want to rework?

I will hear a sound and really like it and want to use it somehow. Or I will like a track and want to mangle it, juxtapose it with something else, make it pretty/ugly or put it in some different context. Quite a few tracks I make for my friends because they request them – “make me a Mariah Carey edit!”

Looking forward, what else have you got coming up over the next few months? Any plans you would like to talk about?

I’m currently writing a piece for viola and bass clarinet that will be premiered this summer. I have some projects in the works with my friend Nunu, as well as with Gran from Intruder Alert. I am also doing some collaborative work – I’m working on an art-video-project with my friend Nina that we will be exhibiting this year and will be doing sound design and music for a dance performance/video installation that my friend the videographer Leon Frind is putting together. Finally, I’ll be trying to organize some events here in Frankfurt and improve the quality of parties and shows here.

Nunu had sent me a bootleg he’d made of Shapednoise and Visionist which I really enjoyed. It’s heavy, texturally dense but still feels weightless and pretty. I more or less decided to build the mix with the goal being to at sometime arrive at that track and sort of expound on its qualities for the duration of the mix. To that end I made some edits of artists whose work I really respect and adore to sort of mine the sound/atmosphere that I wanted to explore in this mix.

I make all of my mixes in Ableton and plan out the trajectories beforehand; the mixes are thus not “recorded” but rather the result of trial and error in song placement etc. I think of my mixes as carefully planned out statements (in the sense of a recital), whereas DJ sets are more like free- form improvisations. I think the mix is a pretty fair representation of a club set although it is necessarily cleaner and makes use of several effects that would not be possible for me to achieve live….