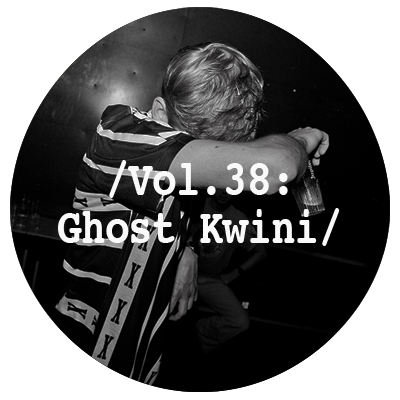 This week Dutch producer Ghost Kwini has dropped his debut EP on the consistently on-point and never predictable blog-turned-label Sonic Router. The four-track ‘Dark Address’ EP is a compelling introduction to the prolific artist that succinctly articulates the depth and imagination of his music. Having watched his progress carefully over the last twelve months, the release of the EP seemed like the perfect time to tap him up for a quick chat and the latest contribution to our mix series.

Exploring a fascination with the internet, the four-tracks that make up ‘Dark Address’ showcase a compelling re-imagining of grime that channels that feeling of sensory overload in to a series of dense, richly melodic and hypnotic productions. Redefining and re-appropriating classic grime tropes across the EP, Ghost Kwini harnesses the  ingenuity of the scene’s originators to his own haunting ends. On EP opener ‘Black Google’, booming bass pulses and bubbling eski clicks anchor sinewy melodic tendrils and the distant call of otherworldly vocals to brilliant effect. Elsewhere, ‘Netscape Navigator’ opens up the palette with its sweeping strings and engulfing bassline, ‘Gothic Sheikh’ flips things on their head with its swirling, weightless arpeggios and off-kilter drum groove and ‘Uncanny Valley’ drops off the grid entirely with its blur of 8-bit melodies, fragmented vocals and shattered rhythms.

Across forty-five minutes, Ghost Kwini’s mix neatly contextualises the EP, placing a whole host of his own productions around tracks from like-minded artists such as Kuedo, Zomby and SD Laika. Providing a brilliant insight into the forces at work in his music, the mix is one that you can’t help but keep returning to as it reveals new details on each listen.

Well, my name is Eddie and I’m from the Netherlands.

I recently came across my old Myspace account and it still had some music I made in 2007 so I think I got into it somewhere around that year. It was just a fun thing to do though, there was nothing serious about it then and there have been large periods of time in which I didn’t produce anything.

Did you set out with a certain vision or focus in mind for the Ghost Kwini project?

There’s no specific vision I think but there are some themes I try to work with and some ideas I like. There’s this movie called Tetsuo and I think it’s one of the best ever made, it’s so wild and chaotic and it reflects the way buildings and technology can overpower someone, can crush you when things go to fast. I feel like today this is also happening except it’s not skyscrapers and highways but everything internet related. It’s like the internet got new tentacles and they are smartphones, glasses and watches and it’s only the beginning. Wasn’t there a kid who committed suicide because he couldn’t make the perfect selfie this year? Well, it’s that I think, the omnipresence of the internet and the absurdness of it. I like to make music that fits that idea or that could fit well under those images. I don’t think I’d ever wear one of those new glasses they are working on now but imagine wearing one and using an app that let’s you datamosh the environment in real time, it’d be mental and I’d play my music while experiencing that.

Here’s part of the Tetsuo trailer with one of my tracks underneath it (Link). I didn’t even intend to do so at first but I thought I should try and it synced pretty good, scarily perfect almost.

While I wouldn’t necessarily try and classify your music as grime in any straightforward sense, the genre is certainly a key touchstone. What was your first contact with the sound and what drew you to it?

I think it was hearing Dizzee Rascal on the radio around 2003. ‘Stop Dat’ is still one of my favorite tunes ever, I heard it on Dutch national radio and thought I had never heard something like that before. I got into dubstep though the years after and it was only after the demise of dubstep that I really got into grime. I love it because it’s just so strange and futuristic, so wild and energetic.

Do you feel that there are any fundamental principles that run through all of your music?

Hm, I don’t know. Tempo is around 140 usually and I like to work with weird samples: voices, sighs and laughs. I guess most of it is also dark.

Your debut EP is due to be released on the London-based Sonic Router label imminently. How did that come about?

I make music for fun so I never really thought it to be important to get something out until I was contacted by some other labels and it got me excited, things never went off though so I decided to send some stuff around. It clicked with Sonic Router.

Can you talk us through the EP and what people can expect from it? How do you perceive it relative to your earlier music?

Yea so it’s a four track EP which (I think) should be listened from start to finish. The first and last track are kinda moody and atmospheric while the second and third track have a bit more energy, a bit more of a pace. So you are right, I wouldn’t call it straightforward grime either though it certainly is influenced by it, so expect a similar tempo and square waves. I’m not good in explaining my music so best is just to listen to it. I used to make a lot of tunes that barely reached a minute in length, these four tracks are among the first tracks I actually finished. The first ones I have put effort in to make sure they are at least somehow coherent, that have a beginning and an end.

Nothing really. I made quite some new stuff since and I’ve been contacted by some people but nothing concrete, I also wanted to wait for this to come out before doing anything else.

So I made this mix in Ableton and it starts with some retro-futurism and then moves into some icey tunes starting with Kanye West’s ‘Coldest Winter’, from there I’ve tried to mix a few of my own tracks along with some favorites of mine. I think it worked pretty great but you’ll have to listen for yourself I guess. I’d play this in a club as well yea, maybe a bit more dancehall though and I think I’d play some juke and footwork as well.