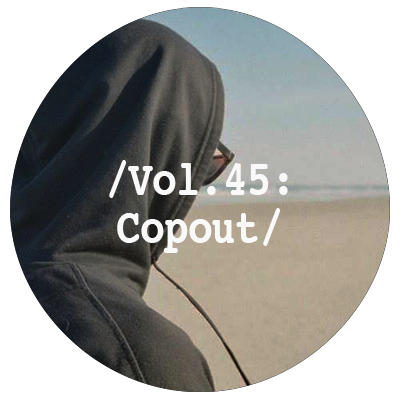 Fresh from his contribution to ‘Liminality 01‘ earlier this month, and with his debut solo EP for the label on its way in the coming months, we are pleased to officially welcome Copout to the Liminal Sounds family as he takes the helm for the forty-fifth volume of our mix series.

Over the last couple of years, Copout has carved out a name for himself with a string of solo and collaborative releases on labels like Soukouch Ethnik, Freshmore and Paradisiaca. Building a distinctive sound that balances propulsive, club-ready rhythms with rich, emotive melodies, his music wriggles free of the constraints of the dancefloor and transcends the confines of the club. This refusal to adhere to traditional sounds or linear structures runs through his forthcoming EP for the label, which we are currently putting the finishing touches to at the moment and are very excited to release in to the world soon.

His thirty-minute mixtape for us succinctly showcases this unique approach, balancing the visceral impulses of the dancefloor with a more delicate melodic sensibility. Blending forthcoming material of his own with tracks from like-minded artists such as Drippin, Kid Antoine and Lao, the mix is a taste of the kind of sounds you can expect from his EP when it drops.

Read an introductory interview with Copout below and check his mix at the bottom of the feature.

First up, for those who may not already be aware can you please briefly introduce yourself?

My name is Brian, I produce under the name Copout and recently moved from Philly to NY.

I first got into production through DJing around 2009. I was constantly being drawn to and playing out these dark hybrid club tracks that were always proving difficult to find so I began to experiment with making my own tracks. It was also during this year that I saw Kingdom, Bok Bok, L-Vis 1990, and Joker during a party at the old Mad Decent Mausoleum in Philly. That night was definitely pivotal in changing my idea of what club music could be and what I wanted to play out and produce.

The proximity of Philly to both Jersey and Baltimore meant the early sounds of Unruly and Brick Bandits were around a lot both on and off the radio. UK Funky had a large impact on my excitement for club music at the beginning and seemed to embody everything I loved. Through Funky I was introduction to Grime and so this combination of early Club Music, Funky, and Grime really laid down the base for where I see myself musically.

Did you set out with a certain vision or focus in mind for the Copout project?

Coming from those influences I knew I wanted to create a hybrid sound. Also my whole life I have been intrigued and surrounded by contradictions in society, in nature, everywhere. This fight between the intellectual and the anti-intellectual. There is always that constant push and pull that you can feel. So I think in some ways my music is fuelled by that and perhaps a way of figuring some of those things out.

A lot of your tracks are led by big melodies. Is this the starting point when you are making a track? Do you play any instruments?

Melody used to definitely be a starting point. Now it is more equally divided between percussive elements and melody. I studied the cello for 14 years and later jazz guitar. I think the classical training I received early on and playing in symphonies definitely has had an impact on the way I think about melody accompaniment and progression.

No not really. I have some general guidelines like I mentioned before but no real specific idea.

So much of my music has been informed from what I have heard at club nights and has always been really inspiring. I don’t know how this really always translates into my own music though. Sometimes I’m really interested in pushing against the assumptions of a club and other times I just think people really just want to have fun.

You have collaborated with a number of different artists over the last couple of years, including Drippin, LOLGurlz and Halp. How did you link up with these different producers? Is it primarily an online thing?

Some of the first tracks I ever put out were part of a collaboration called KNC that I was doing with Krueger when we were both living in Philly. Other collaborations have been through the internet, and start from just mutual appreciation for each others’ tracks.

Do you enjoy working collaboratively? Is it something you are keen to do more of?

I love working collaboratively. For me it is interesting to see and hear other people’s ideas and opinions. I’m not very concerned with making music that fits neatly in any particular category or even sounds like projects I have done in the past so collaboration is a great way to get outside of my comfort zone and to expand the way I am currently thinking. It’s also an interesting way to bring new energy to a track.

Looking forward, what have you got coming up over the next few months?

The biggest thing is my “Bardo” EP coming out on Liminal Sounds. I am also currently working on a bunch of collaborations, and have a few tracks coming out on various compilations.

The mix was made here at my apartment in Brooklyn. It’s a good example of the sounds and styles that have been influential to me recently and what I play out. It also includes some forthcoming tracks from myself and some people that I’m currently working on projects with….but can’t mentions which ones yet though.