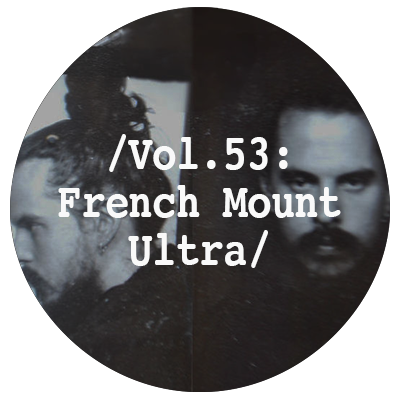 As our catalogue hits double figures, we’re excited to welcome French Mount Ultra to the Liminal Sounds roster for the release of his new EP. In honour of the forthcoming release, he has come through with the latest instalment of our mix series.

Ahead of the release of the EP, which is out this Friday, 23rd September, we caught up with French Mount Ultra to get a deeper insight in to his influences and approach to making music, as well as what people can expect from the record when it drops. He has also delivered a succinct but wide-ranging mixtape that manages to weave together tracks from artists as diverse as Beck, Delroy Edwards and SD Laika. Read the interview below and download the mix at the bottom of the feature.

First up, for those who may not already be aware can you please briefly introduce yourself?

My name is Jamie, formally French, now working under the moniker French Mount Ultra. Based in South East London but originally from South Wales.

I started making music when I was about 15. I was a huge fan of Beck’s really early output, everything pre-Odelay, tapes like Golden Feelings that he made at home. I used to spend whole summer holidays making these stupid albums on my school’s Yamaha 8 track recorder, which my music teacher would surreptitiously let me borrow. They were usually guitar songs that I’d play on guitars that were tuned down to an absurd degree, with some Grime type beat I’d make on a drum machine. Some bits were just snippets of conversations, or bits from TV that I’d record on dictaphones and manipulate somehow. That phase died out, and then a few years ago I was listening to a lot of underground hip hop, mainly Raider Klan and Goth Money Records stuff and just thought “I want a go” and started trying to make music on Garage Band. I had absolutely no idea what I was doing on there though.

I think at that time, I just wanted to work with these rappers I liked, but also wanted to introduce these bits of weirdness to the production. I really wanted things to move forward. I was annoyed that a lot of these beats people were producing were so similar and unprogressive. I worked with some people like Black Kray and some other Goth Money artists who were great and usually very open, but usually I’d send beats out and rappers would reply with things like “make it more Sad Boys”, and I watered my original vision down to such a degree that it became the opposite of what I’d intended to do and felt completely cheap. I remember laying in bed one night and thought that from that point on I’m going to make whatever I want, even if no one wants to hear it and that’s still the way I work now. I remind myself of that realisation constantly. Being true to myself is the most important thing.

Did you set out with a certain vision in mind for the French Mount Ultra project?

I wouldn’t say I had a certain vision other than just making exactly what I wanted to make without compromise.

Almost every piece of music I make starts with a visual idea, as I’m from a visual arts background. So it will be these abstract thoughts like “I want to make a song that sounds like it’s on fire”, or even making some music based on a certain colour. I also really enjoy playing with the process of making music. I’ve made a good number of songs where I’ll work on them for hours and hours without even playing it back once, relying solely on placing stuff visually, so you have all these weird happenings on there that seemed to have happened at random. Most of the time it’s just rubbish, but sometimes something great happens.

How conscious are you of the contexts in which a track will be played when you are making music?

Possibly to my own detriment, not at all. I usually make music where the only audience I have in mind is myself. Someone once sent me this video from a mobile phone of some club in Canada where a DJ was playing out one of my pieces and it felt like the most surreal thing to witness. I couldn’t understand it.

It sounds like a ridiculous answer, but technically, I’m really bad. I grew up making stuff in a really lo-fi way, and although I’ve learnt a lot, even now, every time I make music, it feels like this huge battle. I really have to work hard to get something to sound the way I want it, and I think there are massive rewards in that battle. I think there’s a definite constant mood to the music I make too, which is usually pretty dark, unpredictable and jarring which I think is unavoidable for me just because of who I am. I don’t think I’ve ever made a happy song.

I think it was the ‘Sirens. Heavy. Poison.’ record that you self-released last summer that first caught my ear. How did that project come together?

It came about mainly from frustration at that whole situation of making music that I didn’t feel was true to me. I wanted to make something exactly as I wanted. I wanted it to be angry, violent and frustrating to listen to. I was really interested in UK based movements that flourished from anger and frustration, so there’s a lot of references to punk, Oi!, grime etc. I once met someone at a party who said he’d heard it and found it very uncomfortable and hard to listen to, and I couldn’t have been happier with that comment.

You will be releasing your next EP with us. Can you tell us a bit about the record and what people can expect from it?

Again, this fundamentally came about from visual references. I was really influenced by the decrepit industrial areas of my hometown. I’d sometimes find my way in to these abandoned factories or dock buildings, stand completely still and listen. It was always such a heavy silence which seemed really loaded, like there was nothing there but a million things there at the same time. It seemed very sinister and ominous, and you could almost hear these imaginary noises. I’d get so many ideas for music just by being present in those weird locations for a few minutes at a time. After that I kept having dreams of being in an empty factory which was lit by a blinding white light, which had a profound influence and generally dictated the whole mood of the EP.

Can you talk us through the mix that you have put together for us… Is it a fair representation of the influences that feed in to the French Mount Ultra project?