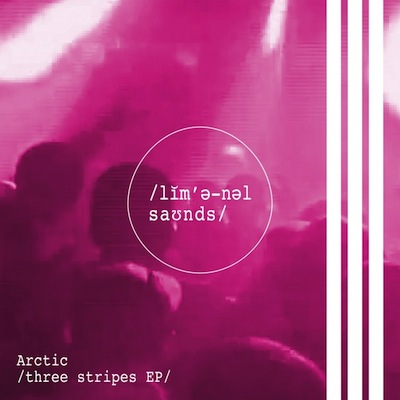 Having opened our account as a label with five interpretations of Youngstar’s grime classic ‘Pulse X’, we are delighted to announce our first original artist EP from Birmingham-bred, Melbourne-based producer James Black, AKA Arctic.

Following a stellar EP for label-to-watch Coyote Records, Arctic steps up to Liminal Sounds with three new original productions and a bonus VIP version that channel the visceral energy and raw experimentation of grime into potent, unpredictable and ultimately impactful club tracks.

EP opener ‘Off Peak’ brings a razor sharp edge to the kind of incisive groove that UK Funky did so well with its deranged vocal chops, elastic bassline and tumbling breakdowns. This undeniable energy is re-enforced subtly but powerfully in the additional VIP version. Title track ‘Three Stripes’ is the pivot around which the EP orbits, skewing the classic 8-bar grime template with its scattershot drums, warped strings and plunging bass, while ‘Seeps’ completely deconstructs everything that has gone before, its industrial speaker-pummelling venom driving forward inexorably.

The EP also comes backed by a remix of the title track from Breen, one of the most exciting producers to come out of the current instrumental grime mêlée. He melts down the essence of ‘Three Stripes’, constructing a fierce, propulsive rework.