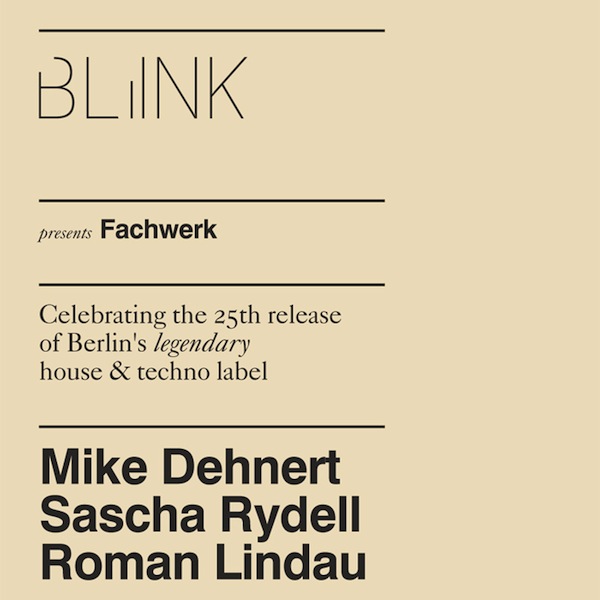 On Friday 15th June Blink will be playing host to a special label showcase from Berlin’s revered house and techno imprint Fachwerk as part of a European tour celebrating their 25th release. We are extremely pleased to be hosting Room Three alongside our good friends over at Get Some.

Since its inception in 2007 the label, run by Mike Dehnert, has amassed a quality back catalogue of records pushing their own brand of raw, deep techno from the label’s three core artists, Dehnert, Roman Lindau and Sascha Rydell. When not pushing Fachwerk, the trio have also been releasing records with revered house and techno institutions like Clone, Ostgut Ton and Delsin. The foundations have now been laid for the release of Dehnert’s seventh album, the aptly titled ‘Fachwerk 25’, to mark the quarter century for Fachwerk. All three artists will be descending on Hidden to spearhead the lineup and represent the imprint.

Room Two will be hosted by the Brighton based imprint Well Rounded, who will be bringing with them a selection of their burgeoning roster. The label, which was kickstarted by Deadboy’s stunning debut single ‘U Cheated’, has released records from a tight knit stable of artists including Hackman, Gongon and Xxxy as well as branching out with sister labels Well Rounded Individuals and Well Rounded Housing Project. Sets will come from label founder Donga, James Fox, recent ManMakeMe signing Leon Vynehall and their latest signing Hodge.

We will be rounding off the stellar lineup hosting Room Three alongside our friends over at Get Some with sets from Kashmir Kid, OUZO, Richard Aki, Knuckles and Elsewhere.

As part of the FOUND series http://www.foundseries.co.uk/