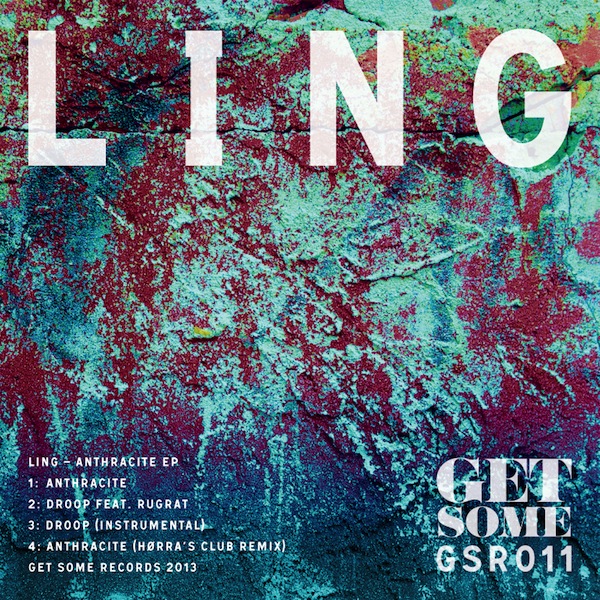 Fresh from a busy 2013 that saw them drop four debut EPs from MYRI4D, Llesca, Elsewhere and HØRRA, Get Some’s burgeoning catalogue continues to focus on championing new, emerging talent. The label is kicking off the new year with another debut, this time handing over the reins to the forward-facing club experimentation of LinG.

Drummer turned solo electronic producer LinG steps up to the plate with the four-track ‘Anthracite’ EP, delivering a dense tangle of propulsive rhythms, distorted textures and heaving bass weight that escapes any simple classification. The title track balances an ear for intricate sonic textures with a rugged dance floor groove, emerging from a billowing cloud of interlocking ambient patterns before releasing a gnarled drum line and warped low-end, which carries the track into the darker recesses of the dance floor. Stepping up on remix duties HØRRA leans on the dense ambience of the original to set the tone before unravelling the opaque layers to unveil a lean and hypnotic club arrangement that plays a sharp drum line off against its infectious tuned-percussion hook.

Second original track ‘Droop’ featuring Toxteth MC and G Fam member Rugrat sees LinG lend his unique approach to a more grime-influenced sound. Unleashing an industrial sonic palette that draws on the guttural ferocity of grime at its most potent, LinG builds a dense canvas of tumbling kick drums, whiplash snares and heavy bass over which Rugrat spits his venomous bars. The EP is then completed by the instrumental version of ‘Droop’, allowing LinG’s enthralling production to take centre stage.

Providing a platform for new talent that deserves to be heard, Get Some have discovered another unique artist in LinG. The ‘Anthracite’ EP is out on 3rd March, but until then you can hear clips of each of the tracks on the Get Some soundcloud.