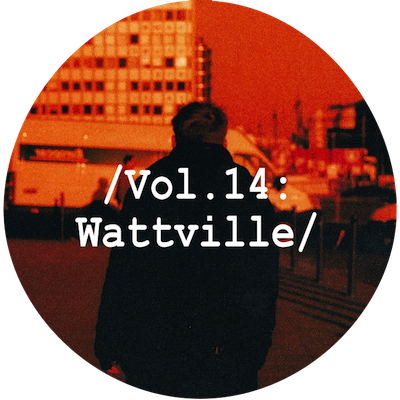 Having found myself in the privileged position that I get sent music from a number of artists and labels that I have followed and admired for a number of years, it is all too easy to find myself focusing in on those names in my inbox and letting everything else slip by into a growing mound of unread emails that will be lost and later deleted. However, there is something very sincere and personal about sending out your tunes and offering them up for judgement that impels me to check everything that someone has taken the time to pass on to me and try and get back to them in some form or other. And once in a while you get rewarded for your due diligence. The music of Wattville is one such reward.

I don’t know a huge amount about him other than what you will read in the interview below – I can’t even remember in exactly what context he reached out to me – but after hearing a couple of tracks from this latest project, that was more than enough to make me curious to find out more. ‘Etching’ is a well deployed exercise in sparse dance floor construction, playing its simple synth hook off against those rippling bass hits while the vocal refrain flutters through the middle of the track on the metronomic hi hats. However, it was second track ‘Clan’ that particularly stood out to me and had me on the back foot immediately. It’s manic tribal rhythms, squirming oddball melody and seismic sub quakes are so unique, raw and urgent that the track is impossible to ignore.  In the hands of a lesser producer this probably wouldn’t work, but Wattville pulls it off with finesse. Deployed at the right time, this is one of those tracks that will stop you in your tracks in a dance. Having heard only a very small amount of music I don’t really know what will come next, but personally I am really excited to hear whatever it is. With some forthcoming releases in the pipeline which are currently under wraps, I would recommend keeping a close eye on him…

To accompany the interview he has contributed the 14th installment to the Liminal Sounds mix series which you can stream and download below. Over 40 minutes he weaves together a diverse selection of tracks that are all imbued with the same rugged, tribal and hypnotic spirit that runs through this own productions, a couple of which are slotted in there. Taking a slightly different approach to your standard mix, he lets the ebbs and flows of the tracks work their magic and dictate the pace of the mix, not forcing any connections but instead letting them take their natural course. The result is a well thought out and sonically powerful insight into the forces behind his tunes.

First up, can you please introduce yourself?

Hi my name is Matthew Evans, I’m 19 and although originally from Birmingham, I moved down to London this year.

When I was 13 I bought my first set of decks and began to mix any music I could from Hip Hop to jungle. I think this was when the passion for dance music became rooted. I also went to Berlin for a while when I was 17, and became really captured by all the minimal techno I was hearing and during that trip I grabbed a copy of ableton and started to write electronic music more seriously. Prior to this though I had been in bands since my early teens and always loved writing and playing shows, but working with a group I find really frustrating at times. I think I like the control of producing on my own and knowing if it all fucks up it’s due to me, that it’s me who the project rests on.

Were there any particular artists or songs that acted as a catalyst to start producing?

Records like ‘Loveless’ by My Bloody Valentine got me really interested in production in the more traditional sense. That record holds such a clear aesthetic and sound which has always fascinated me. The production makes no sense at all, the vocals are pretty much inaudile, the drums are so low in the mix, the guitars are so vast that anything else doesn’t really hold up to it, yet it completely works and just sounds incredible. In terms of dance music though, the first time I heard ‘Moth’ by Burial & Four Tet my jaw dropped. For me I think it is the best dance record I have ever heard, such a master class in subtlety, and it throbs along and you get so lost in it. I think it’s one of the few perfect records I know of.

How has your production style and musical taste developed to the point it is at now?

My music taste has always been an eclectic one. It ranges from properly leftfield avant garde classical music to out and out pop music. I think it’s important to try and absorb as much music as I can and when I hear a record that really grabs me it just reignites the passion to get writing.

What is the story behind the Wattville project? Is there any concept or overarching vision behind it?

Wattville has just become a really important outlet for me personally I think. The solipsistic nature of producing is something I really love, the fact that everything around me can be blocked out for a while when I’m writing a track. I think a basic manifesto that overrides the project is just to make music that sonically holds real atmosphere and emotion. Equally I wanted to make tracks that make people listen. Previous records I’ve made with different projects became background music too easily. I want it to be music that isn’t just there but listened too.

I am really interested in how the creative process works for different producers. Where and when do you produce? Do you find certain times and situations conducive to making music?

My creative process I think is similar to a lot of people, that I can be working away for months on one track and I get utterly disillusioned with it to the point where the track never leaves my harddrive. But then I can have a flash of inspiration and a track gets written in an hour that I am super proud of and happy to release. Also my life seems to be constantly on trains going up and down the country and sketching out a new track is often a way of passing the time, and I can really focus as there is nothing else to do. I think equally environment has a really strong impact on my work. Since moving to London my music has changed completely I don’t know if for the better or worse it just has done.

When you are making tracks, are you aware of the sound you are aiming for or the people inspiring you? Or is it a less conscious and more organic process?

I make a conscious effort to not listen to any dance music when I’m writing. When I do I find I rewrite tracks just to a poorer standard. So separation is a huge thing for me. I will always start with a clear idea though; rarely do I just fuck around with sounds for a while and hope something comes out. I use to work in that way but it always sounded too unfocused, like 5 tracks were fighting to be in one.

Every track I make I just hope that energy and momentum is audible within it. As long as the music I’m making is really honest work then I’m happy.

Have you got any releases in the pipeline for the coming months?

There are yes but unfortunately I’m unable to talk about them too much yet.

Thanks for putting together a mix for us. How did you put it together? Is this a fair representation of the music you are feeling and playing at the moment?

Yeah it really is. I’m really drawn to the tribal elements that you hear in all these tracks. A lot of the mix sounds really raw and primal and I like that. Mixes that have a million tracks in half and hour really irritate me and that’s not the way the records such be played out so theres one Animal Collective remix in there which I have left the full ten minute version in as the rising and the falling and the progression of the track is so important to it. All the tracks in the mix I dig so so much and hopefully it’s an interesting journey to go on for 40 minutes.